The German Christmas Pickle – A Myth or a Lie?

Let’s talk about  a “German” Christmas tradition that is somewhat unusual and deserves some attention.
It’s the tradition of the Christmas pickle. Today I heard the first time about it, and being a German I wanted to know more about it. It was not a tradition in my childhood. 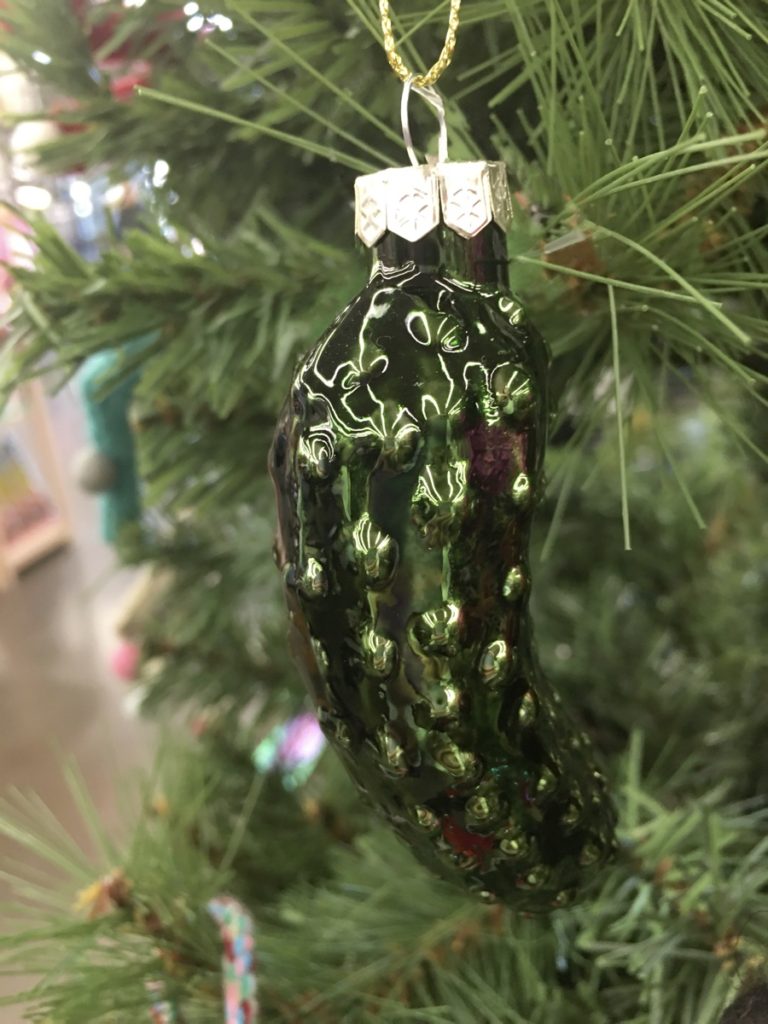 Some research was needed to find out more about this strange “unknown” tradition I never heard about. At first I thought maybe it is coming from East or North Germany but still, something did not feel right about this Christmas pickle.

The German Christmas Pickle  – A Myth or a Lie? What is it? Where is it

It is simply a Christmas ornament that looks like a pickle, and it will be hidden in the Christmas tree. The first child that finds the green pickle Christmas morning will get an extra gift, or it also means good fortune for the lucky finder. The last one sounds more like a Chinese tradition to me, it reminds me of fortune cookies…

The city in Michigan named Berrien Springs, is to be known as the “pickle capitol of the world”. What do you know? They hold a pickle festival in early December and even have a pickle parade. This is not surprising because cucumber plantations and selling pickles makes their business but what does this have to do with Christmas? In fact, nothing. And does it have anything to do with Germany? No, it doesn’t.

But wait, it gets more interesting. Americans believe that this Christmas tradition originated in Germany, and some even say that the origin of the Christmas pickle may have been developed for marketing purposes in the 1890s to coincide with the importation of glass Christmas tree decorations from Germany.
The first company to import these types of decorations like glass blown vegetables, into the United States in 1890, were imported from France (1892 and onwards). That sounds like a good story and the question occurs, why isn’t France the originator of the Christmas pickle tradition? WEll, for some reason Germany was the chosen one.
And last but not least here is the ultimate proof that it is a German invention:

One suggested origin has been that the tradition came from Camp Sumter during the American Civil War. The Bavarian-born Private John C. Lower had enlisted in the 103rd Pennsylvania Infantry, but was captured in April 1864 and taken to the prison camp. As the story is told, on Christmas Eve he begged a guard for a pickle whilst starving. The guard provided the pickle, which Lower later credited for saving his life. After returning to his family, he began a tradition of hiding a pickle on their Christmas tree each year. This is really a sweet and touching story. Still I didn’t buy it.

I had an idea and started to ask my German followers of the Facebook page and asked them the question: True or not?
The survey on my Facebook page of www.Mybestgermanrecipes.com revealed: The majority commented with a clear NO.  No, it is not a German tradition. That was in 2012.

Now in 2019 another survey will be launched (just for fun).  And if you have another story to contribute thatmight proof the Christmas pickle is a German tradition, please feel free to comment abut it.

In the case you like to decorate your Christmas tree with the pickle, Amazon sells them!

5 Comments on “The German Christmas Pickle – A Myth or a Lie?”