The Rhineland potato specialty Kesselsknall is a regional dish from the Rhineland which is the region around Dusseldorf, Cologne, Bonn and Koblenz, and further down. It is one of the most picturesque and unique region of Germany. Along the Rhine  you can find old castles, wineries, lovely old towns and villages, and everything which are attributes of the German culture and tradition. The Rhineland is also a place for many German delicatessen.

One traditional dish from the Rhineland is the  “Uhles” or “Kesselsknall” or “Doeppekooche”.
It is a dish consisting of potatoes and special sausages, called Mettwurst. Mettwurst is a raw sausage, and made out of pork or partially ground beef; preserved through smoke or just dried; similar to the Italian sausages. Used in stews and soups (Eintopf = everything cooked in one pot)), combined with Sauerkraut and potatoes. Unfortunately Mettwurst is not available in the USA. We searched all the channels but couldn’t find it. But this is not the end of this recipe. You can use the Bavarian sausages like smoked Bratwurst or uncooked Bratwurst (Trader Joes has it).
The Kesselsknall dish is served traditionally around the ST. Martin’s Day around the region Andernach. The city of Koblenz celebrates  since years the “Debbekoochefest”.  Now you know everything to cook this dish! Happy Cooking! 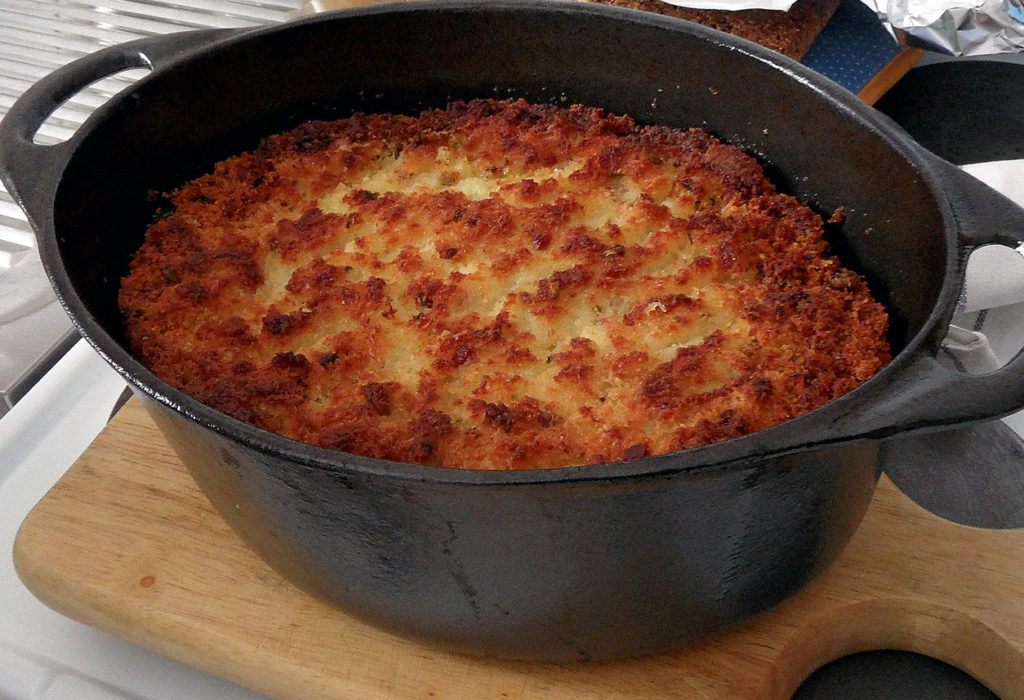 2,5 kg potatoes, floury potatoes are better than the waxy ones
4 onions, chopped, some chopped garlic (if you like)
150 g German smoked bacon (Speck), chopped
some cooking oil to fry the onions
some lard (optional) use clarified butter instead
4 sausages, slice them or leave as whole
2 eggs
salt and pepper, ground nutmeg to taste
1 jar apple sauce, 700g

– Peel potatoes
– Grind the potatoes and onions by using a grater.
– Add garlic if you use it.
– If the potato mix should turn brown, just stir it again or add some lemon juice. Some use sulfur powder to prevent  that but it is not really necessary. We prefer it completely naturally as sulfur always leaves some taste.
– Now you must add salt and pepper (not later because the potatoes wont take up the salt anymore). Calculate 1 teaspoon salt for 1kg potato.
– Adding eggs: The dish will become more mushy when adding NO eggs. You would add eggs if you want the dish dry. Mix in the eggs with 2 tablespoons flour.
– Use a fire proof high pan with a lid.
– Rub the inside of the form with lard, add a bit of oil. You can layer the inside of the pot with the Speck (bacon) but you don’t have to.
– Place the sausages in the middle or mix in the sliced sausages.
– Bake it for at least 2 hours in the oven (220 degrees or 425 F); increase the temperature a bit for the last 20 minutes to get a nice crust.
– Serve it with apple sauce or with a green salad (preferably endive).