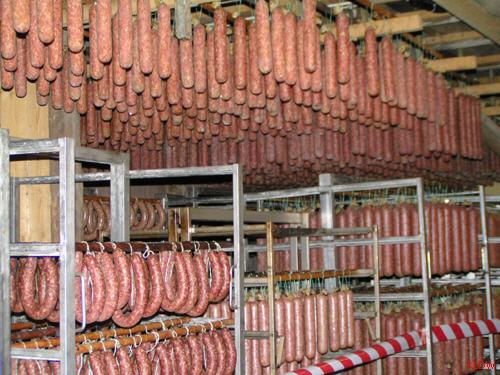 German Sausage and Bratwurst are the best, and Germany is the country of the sausages. There are many US companies who carry on the tradition of German sausage making.
The German sausage recipes vary by region and even locality; we have over 40 different varieties of Bratwurst, many of them are from the Frankenland (Franconia or the Northern part of Bavaria), a very popular sausage comes from Thueringen or Thuringia.
Sausages in Germany are a snack mainly, served with mustard of all variations, or ketchup in combination with curry (Currywurst), and a Brötchen or bread roll made out of wheat flour. The best Fast-Food there is! There is no market without a Bratwurst booth, no fair, no street fair – it is so traditional like almost everything in Germany.
As a main dish it is served with Sauerkraut, potato salad, mashed potatoes, fried potatoes, Bretzel or French Fries.Franconian varieties

The Franconian sausage is a relatively long (10–20 cm), thick, coarse sausage, common to the whole Franconian region with slight variations. It dates back to 1573. Characteristic ingredient is marjoram; its taste is close to the Nürnberger Bratwurst but juicier, due to its size and coarseness. The Fränkische Bratwurst is traditionally served with sauerkraut or potato salad, but with no mustard — although many customers disregard this tradition and demand plenty of it.

Coburger Bratwurst (from the city Coburg)

Bratwurst originating in the city of Coburg in Franconia was first documented there in 1498.It is made from a minimum of 15% veal or beef, and its seasonings include only salt, pepper, nutmeg, and lemon zest. It is coarse in texture and measures about 25 cm in length. Traditionally, it is grilled over pine cones and served in a bread roll (Brötchen).

Kulmbacher Bratwurst (from the city Kulmbach)

The Kulmbacher Bratwurst, from the city of Kulmbach in Franconia, made mainly from finely ground veal, is long and thin.

Nuremberg is not only famous because of the best Christmas market, they also have a sausage that is popular all over the world. The small, thin bratwurst was first documented in 1313; it is surprisingly small, being only 7 to 9 cm in length and weighing between 20 and 25 g. It is known under the names Nürnberger Bratwurst and Nürnberger Rostbratwurst (Rost ris the German word for grill); the sausage tastes the best when cooked over  a grill. The sausages can be produced only in the Nuremberg because they are Protected Geographical Indications (PGI) under EU law since 2003, and the “Association for the Protection of Nürnberger Bratwürste“, established in 1997 makes sure that this law is enforced.

The sausages are Pork-based and typically seasoned with fresh marjoram which gives them their distinctive flavor, and they are normally grilled over a beechwood fire. As a main dish, they are served in sets of six, eight, 10 or 12 on a pewter plate (round but also frequently heart- or bell-shaped) with either sauerkraut or potato salad, and accompanied by a dollop of horseradish or mustard. They are also sold as a snack by street vendors as Drei im Weckla (three in a bun; the spelling Drei im Weggla is also common, Weggla/Weckla being the Nuremberg slang for Brötchen), with mustard being offered to spice them up to personal taste.

A particular way of preparing Nuremberg sausages without grilling them is to cook them in a spiced vinegar and onion stock; this variety is called Blauer Zipfel (blue lobes).

Würzburger Bratwurst (from the city Würzburg)

The Würzburger Bratwurst, or also known as the Winzerbratwurst, comes from the city of Würzburg in Franconia. Its size is similar to the Thüringer Rostbratwurst, but its ingredients include white Franken-Wine. 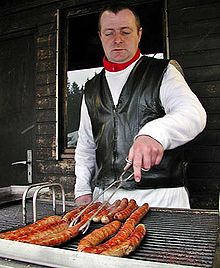 Triggered by the discovery in 2000 of an account entry of 1404 first mentioning the Bratwurst in Thuringia in the town of Arnstadt, the association “Friends of the Thuringian Bratwurst” was founded in 2006. In the same year, the association established the Erste Deutsches Bratwurstmuseum (First German Bratwurst Museum) in the village of Holzhausen. A two-metre-high wooden monument of a Bratwurst in a bun on a local traffic roundabout advertises the museum.

The Nordhessische Bratwurst is similar to the Thüringer Rostbratwurst in taste. It is made from coarsely ground pork and is heavily seasoned. It measures around 20 cm in length. Traditionally, it is grilled over a wood fire and served on a cut-open roll with mustard. 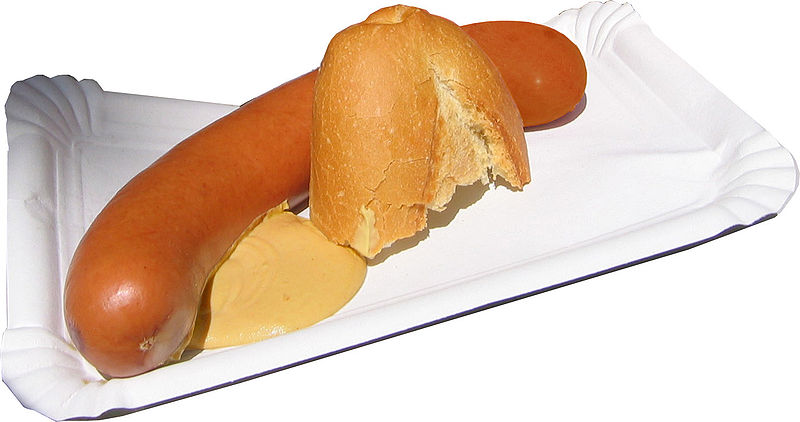 The Rote Wurst (red sausage) is a favorite Bratwurst of the Swabian region; in other regions they call it Bockwurst. In 1889 host Robert Scholz with offered his guests a different kind of sausage from Jewish butcher Benjamin Loewenthal. The sausage was finer and was made out of veal and beef. He served them with a local beer, the Tempelhofer Bockbeer. Since then the sausage was called Bockwurst and became a popular snack in Berlin and surrounding.

But in the South, in Bavaria the sausage was already since 1827 a popular dish in the beer pubs for breakfast or brunch.

It is made from finely ground pork, sometime with veal and/or and bacon. Is tastes delicious just boiled in water, but you can get it on any Swabian market grilled with mustard and a bun. 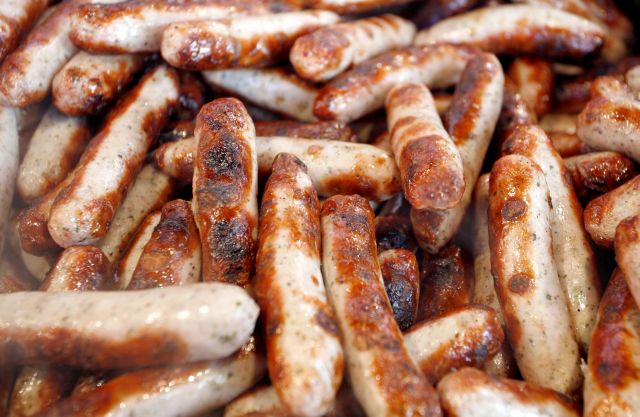